The history of Guild Guitars is the story of a great American tradition in the art of guitar manufacturing. It's a story rich in people and personalities, instruments and artists, triumphs and tragedies. But more than anything else, it is the story of a 45-year-old commitment to quality craftsmanship, superior value and guitars that are made to be played.

The Guild Guitar line was founded as a quality alternative to the Gibson-Epiphone merger. Alfred Dronge, a professional guitarist and music store owner, and George Mann, a one-time Epiphone exec, formed a partnership and registered the Guild name in October of 1952.

The partners set up shop in a 1500-square-foot New York City loft in the midst of two very important communities: the community of experienced craftsmen from the nearby Epiphone and Gretsch factories and the community of big-time jazz session guitarists performing and recording in New York.

From the former group, Guild hired a handful of seasoned craftsmen to begin the design and production of the original Guilds. From the latter group, the recording artists with whom Dronge was connected, Guild was able to receive valuable professional input on building better guitars 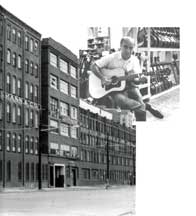 The Guild factory in New Jersey was located on the second floor of this building. Alfred Dronge, show above checking an acoustic, was known as a man who cared intensely about his guitars, the people who made them and the people who played them.

After only a year, the Dronge-Mann partnership dissolved. George went his way, leaving Al in charge. Determined as ever, Dronge pursued his vision for Guild guitars, but to make the dream a reality he would have to seek out better and better craftsmen

In this crucial period, the men Dronge found to build the Guild tradition came from around the world. Key men like the "Three Amigos"—Gilbert Diaz, a Gretsch veteran originally from Puerto Rico; Carlo Greco, a classical guitar builder from Italy by way of Argentina; and Fred Augusto, a finishing specialist—were responsible for more than 25 years of refining and perfecting Guild guitars.

By the end of 1956, the success of Guild's early efforts forced the company to seek out a larger facility, which it found across the river in Hoboken, New Jersey. These were heady days of dramatic product improvement and growing market credibility. Guild attracted the biggest guitarists of the day. Johnny Smith worked with the factory to develop a signature guitar which became the Artist Award. Another jazz giant, George Barnes, helped develop another signature guitar. Both of these models were in high demand among studio performers, and Guildís Duane Eddy signature hollow-body became a rockabilly classic.

Through the 1950s and into the ’60s, the popularity of jazz gave way to folk, pop and rock forms. Guitar business boomed, and Guild stayed with the times by working with prominent new artists and developing new products, including solidbody electric guitars and basses. The Hoboken factory expanded until it could expand no more, at which time Al Dronge discovered an old furniture factory in Westerly, Rhode Island, with all the space and many of the machines and craftsmen Guild would need for increased production.

While production moved to the Westerly factory, the offices remained in New Jersey, a situation that would prove fatal. While commuting to the factory in his private plane on May 3rd, 1972, Al Dronge ran into heavy weather and died when the plane went down. 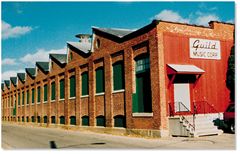 The current Guild factory in Westerly, Rhode Island, has been producing Guild guitars continuously since 1967

Dronge's death was a blow to Guild, but his powerful legacy remained the guiding spirit behind operations. Despite many challenging ups and downs through the late ’70s and ’80s, the factory in Westerly held to its ideal of craftsmanship. But it wasn't always easy.

When Guild was eventually purchased in 1995 by Fender Musical Instruments, the event was hailed by the craftsmen in the factory. It was "a home run for Guild," as Willi Fritscher, Guild's long-time plant manager, put it.

Fender, under the personal direction of CEO Bill Schultz, has wholeheartedly committed its resources to the survival and prosperity of the Guild vision of tradition, innovation and value. This commitment means doing all the things that made Guild great in the first place: investing in the highest-quality craftsmen and equipment, and establishing close ties with the finest guitar players. The guitars produced by Guild have always been inspired by the needs of the guitar player. Guilds are designed with a love for tradition, a respect for innovation and a commitment to value.

And what does the future hold? Great guitars for all the generations of guitarists to come. We just can't wait to hear them.